The common question we get is, do we have jamb liners for a specific brand of window?  Yes, but not that brand.  What I mean is, most brands double hung windows used a standard profile that is universal across the industry.  Yes, while there may be subtle differences in minor details, the shapes are basically the same.  Here are the only three pieces of information you need to gather:

2.  LENGTH.  Measure from the top of the jamb liners to the long point of the angle at the bottom.  The standard lengths run every 4 inches to the 3/8″ of an inch.  This should be, or close to, the length you have.  We can cut  standard length jamb liners up to an 1″ without affecting the operation. However, you should not get a length over 3/8″ or more than 3″ away from the next standard size. 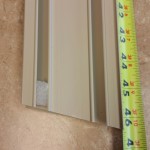 3.  PLOW SHAPE.  This is the shape of the track on the jamb liners that match up to the groove cut into the side of the sash. 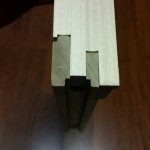 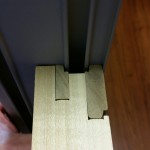 The square plow has a “square” shape to the track and a square shape groove cut into the side of the sash as you see here. 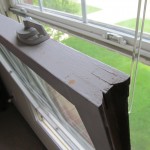 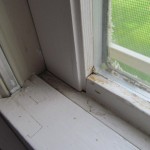 The “V” plow has a “V” shaped track and the opposite “V” shaped groove on the sash allowing the two shapes to fit together.

We’re working on some short videos to make as many of our products DIY friendly as possible.  In the meantime, here’s a few installation tips.

1.  Vinyl compression jamb liners are held in the jamb pocket via a flange on the edges.  These flanges fit into a groove in a piece of trim called the jamb stop.  There is a jamb stop on the exterior side of the jamb, and one on the interior side.  As long as you are working with a wood, tilt-in double hung window made since the early 80’s, you should have the flange type jamb liners.  There should not be any fasteners to remove.  Pry against the jamb liner in between the edge of the liner and the jamb stop to expose the flange.  Continue to pry along one edge until the jamb liner pops out of the pocket.

2. Install the new jamb liner by setting one edge into the jamb stop and squeeze the liner together to set the flanges in  place.

3. You DO, have to replace the tilt pins that match the balance ends in our kits.  New tilt pins are included along with instructions in the box.

4. I’m assuming you already had the sashes out but….Let’s go back to the beginning.  Vinyl “compression” means the sashes are held in by the liners putting pressure on the sides of the sashes to hold them in.  To “tilt-in” your sashes:

5.  One more tip.  You don’t want to caulk any part of the jamb liners to the window frame.  It sounds like a good idea to keep water out, but the jamb liner has to be able to expand and contract to operate properly.  Caulking will basically lock it in place and not allow it to seal to the sash.  Oh, and DON’T paint them!